Every Aug. 10, the world — or at least part of it — celebrates Vlogging Day. A vlog, for those who don’t know, is a blog conducting on video.

Vlogging is the video equivalent of Blogging. The day began in 2018 to mark the 10th anniversary of “Summer in the City.” That’s the United Kingdom’s largest online video festival that brings vloggers and fans together, DaysoftheYear tells us.

I had never heard of “Summer in the City,” and there are very few “vlogs” that I watch.

There’s one blogger whose videos I do watch from time to time: that’s Thomas Frank, founder of CollegeInfoGeek. Frank posts lots of useful videos on a variety of subjects that includes increasing productivity. His YouTube channel amassed 1.98 million subscribers alone! I’d call that a success story!

His videos are highly edited and well-produced. You can watch a sample here:

DaysoftheYear suggests the best way to celebrate Vlogging Day is to make your own vlog. If you don’t care for that idea — and I don’t — it suggests watching other vlogs.

Back in 2013, I told you about four reasons I didn’t start vlogging. If you think that’s a long time ago, consider this: the first vlog hit the net in 2000.

Brace yourself. That was 20 years ago! Feel old? I do, thanks.

In any case, I still feel no desire to get in front of a camera and vlog. I might be more likely to start up a podcast one day. But even that seems a bit doubtful.

In the meantime, I’ll check out vlogs once in a while.

And when it’s time for me to create content, I’ll just start typing away here at Patrick’s Place. And I will appreciate more of your generous attention.

If you’re really into vlogs, however, today’s the perfect day to celebrate the people who produce them.

What If You Don’t Want to Make the WordPress Switch?

Before You Send Your Business Pitch, Do This First! 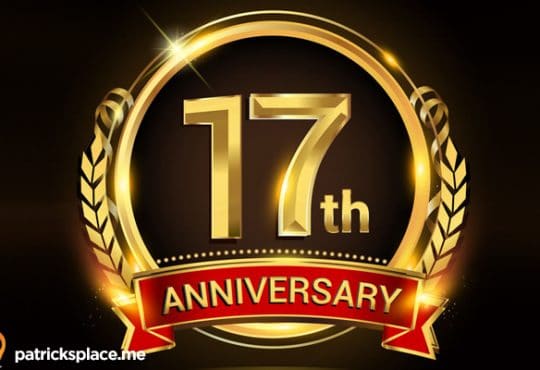 Can You Believe I’m Celebrating This Blog’s 17th Anniversary?

If You Use Stock Images on Your Blog, Here’s an Important Tip!