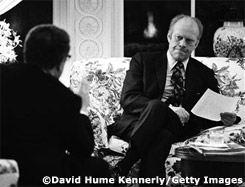 The only American president ever to reach the White House without being elected to the office, Gerald Ford, has died at age 93.

The news came late tonight from his family.

Ford wasn’t a great president, but I think he was a good president, and more importantly, a good man. He was sworn in on the heels of the unprecedented resignation of his predecessor, Richard Nixon because of the Watergate crisis. Upon taking office as the 38th Commander-in-Chief, he told a national audience, “Our long national nightmare is over.”

former president. At the time, it sparked furor, and it is widely regarded as the reason he lost his bid for the presidency to Jimmy Carter in 1976. Ford explained that with all of the problems he had inherited from Nixon, including rising inflation, energy shortages and a recession, he was forced to devote too much time to dealing with the possible trial of Nixon, and he recognized that such legal proceedings would further divide the country potentially for years to come.

Yet in later years, the opinion of many changed: the pardon came to be considered an important move necessary to help the country move forward. In 2001, Ford was honored with a John F. Kennedy Profile in Courage Award, and Senator Ted Kennedy, who publicly criticized the pardon in the 1970s acknowledged that the action was a courageous one that historians feel was in the nation’s best interest.

In a speech that came near the end of the Vietnam War, says MSNBC, Ford evoked Lincoln, saying that it was time to “look forward to an agenda for the future, to unify, to bind up the nation’s wounds.”

I think it’s unfortunate that more of a lesson wasn’t learned from Ford’s presidency. 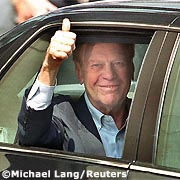 Here was a chance this country had to wipe the slate clean and return a sense of decency, honesty and trust to the Oval Office. In the decades after the 1970s, it seems that Washington failed to take advantage of the second chance Ford offered. From the White House to Congress, I suspect that the days of Nixon don’t look all that bad to some people by comparison these days.

Two years ago, at a ceremony marking the thirtieth anniversary of the start of his presidency, Ford said, “History will judge our success, but no one can doubt our dedication. We set out to bind America’s wounds, and to heal America’s heart.”

Changes Planned for the Next Presidential Debate

How’d You Like to Work (and Live) in the Oval Office?

Why Viewers Complained About Calling Karen Pence By Name

‘Shame On You:’ Obituary Points Blame After COVID-19 Death