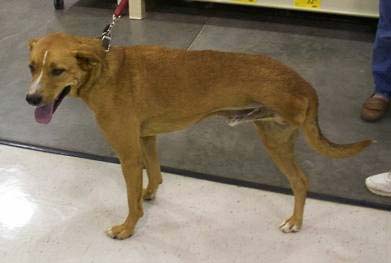 Meet Rusty, an unfortunate little guy who is a featured pet at a local animal shelter. I call him unfortunate not because he is missing a leg, a fact that is easy to miss at first (most of us look at the face first rather than counting feet); but because he does not have a home to call his own.

Rusty is a gentle dog, sweet, loving and laid back. He likes to be petted, and will even get up and move closer if he thinks he might get an extra few seconds of love for the effort. (The shelter, incidentally, isn’t sure about what happened to him: it seems that Rusty and another dog were thrown over a fence into the shelter’s property and found the next morning…the amputation had already been done and the wound healed…so the speculation is that he might have been hit by a car when young.)

Watching him interact with two little girls who fell in love with him on the spot, I marvelled at how this dog doesn’t seem to be bothered by the fact that he’s missing a leg. He hops around a bit because of the missing leg, but he doesn’t pout over it. Unlike many people facing some kind of trauma in their lives, Rusty doesn’t wallow in self-pity. Rusty’s just a dog, of course, but when it comes to common sense and the ability to see past life’s little unfairnesses and worry about the really important things, he’s doing better than many of his human counterparts.

You Won’t Take the Vaccine, But You’d Trust a COVID Pill?

The Homebuying Process: Watch for a Rising Mortgage Payment!