I got a nice honor from TIME Magazine: I’ve been named their Person of the Year.

Before you wonder how a blogger and behind-the-scenes television producer could get such an honor, I should come clean and point out that I’m not the only Person of the Year. You got it, too. In fact, everybody got it!

Here’s a short portion of their long explanation for the target of their award:

“Seriously, who actually sits down after a long day at work and 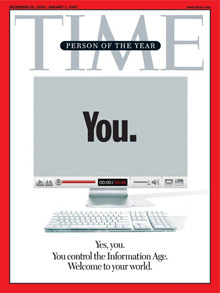 says, I’m not going to watch Lost tonight. I’m going to turn on my computer and make a movie starring my pet iguana? I’m going to mash up 50 Cent’s vocals with Queen’s instrumentals? I’m going to blog about my state of mind or the state of the nation or the steak-frites at the new bistro down the street? Who has that time and that energy and that passion?

“The answer is, you do. And for seizing the reins of the global media, for founding and framing the new digital democracy, for working for nothing and beating the pros at their own game, TIME’s Person of the Year for 2006 is you.”

An interesting thought, I’ll admit. But it still seems like something of a cop-out. To award the Person of the Year to society at large sounds to me like the back-up plan designed in case the editorial board couldn’t come to an agreement and couldn’t even break a tie.

Still, that’s the decision this year. So congratulations!

What are you going to do with your award?

My Web Host Shocked Me with Malware Scan Results

How Much Would You Pay for a Twitter Subscription?