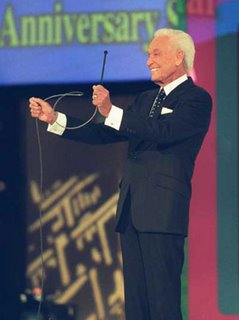 It’s birthday #82 for Bob Barker, host of The Price is Right.

Barker is one of a handful of emcees I watched growing up that made television seem so much fun, even when things were going wrong.

Since 1972, he’s been host of the CBS show, which is now in its 34th season and long ago broke all records as television’s longest-running game show.

There are a handful of folks on my mother’s side of the family who don’t believe in the word retirement. I’m not so sure I’m one of them.

But I certainly hope that if I make it to my eighties, I’m doing something that I enjoy enough that I’m motivated to keep working. There are far worse fates one could wish for.

And I figure that by the time I’m 82, the retirement age might well have jumped up to 90.